Since today’s theme is anything of a bizarre nature…have you seen this “as seen on tv” product? 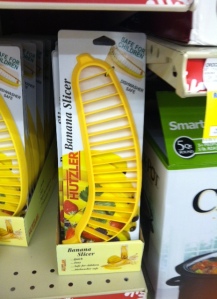 I first stumbled across the wonder that is the Banana Slicer on Pinterest and now I’ve found it in our local grocery store. I swear I almost purchased it just to say I own one. If you haven’t read about them you must go to amazon and read the customer reviews.

These are a few of the best.

“5.0 out of 5 stars No more winning for you, Mr. Banana! March 3, 2011
By SW3K
For decades I have been trying to come up with an ideal way to slice a banana. “Use a knife!” they say. Well…my parole officer won’t allow me to be around knives. “Shoot it with a gun!” Background check…HELLO! I had to resort to carefully attempt to slice those bananas with my bare hands. 99.9% of the time, I would get so frustrated that I just ended up squishing the fruit in my hands and throwing it against the wall in anger. Then, after a fit of banana-induced rage, my parole officer introduced me to this kitchen marvel and my life was changed. No longer consumed by seething anger and animosity towards thick-skinned yellow fruit, I was able to concentrate on my love of theatre and am writing a musical play about two lovers from rival gangs that just try to make it in the world. I think I’ll call it South Side Story.Banana slicer…thanks to you, I see greatness on the horizon.”
“My 27 trained monkeys love thisMarch 3, 2011
By L. Blankenship
As you may or may not know, I have 27 trained monkeys I use to do my evil bidding. Well, the younger monkeys teeth have not fully developed and so slicing a banana to feed them is a necessary chore. The adult monkeys used to have to chew up bananas and feed their young but not anymore with the Victorio Kitchen Products 571B Banana Slicer. The adults are going bananas over this time saving easy product. No longer so they have to taste and chew the deliciousness banana without eating it teasing them like a teenage prom date.Now, they can eat and enjoy while i feed the young by slicing the bananas into small pieces that’s easy for them to digest, This product is aces in my book and if you have 27 trained monkeys that will help you take over the land of OZ, i highly recommenced this product. This product is more useful than a barrel of monkeys.”
:A life restored,November 17, 2012
By
Erica A. Fagin – See all my reviews
(REAL NAME)
This review is from: Hutzler 571 Banana Slicer (Kitchen)

Until recently, my life was a vapid, meaningless husk of an existence, much unlike the mashed up bananas I would throw out still in their peels due to my inability to cut them with perfect Euclidean precision. Ever since my parents’ divorce due to my mother having an affair with a man who made money off child slavery on Chiquita plantations, my house was no longer a home. My father took to drink and gambled away all our money, and I was forced to move out of the house and take to the streets. I’m not proud of what I did in those years, but I did what I needed to survive.

As I plummeted deeper into a downward spiral of crippling loneliness and intense, incapacitating desperation, I lost track of time and space. I wandered the streets in a potassium-deprived daze, sleeping in alleys more than my own, termite-infested tenement building. On days that I could afford food, I spent it all on bananas, but such was my torment! I would crack the peel to find the flesh uncut. Oh, would that I had a knife! And if I had a knife, would that my hands no longer shook from hunger and dementia so that I could slice! And if I could slice, would that I could do so with the precision of deities and angels, whose finesse with a such implements is only outdone by their wisdom and love for us mere mortals.

My desperation became torment, my torment became utter moribund depravity. At my lowest moment, I lay on my floor, staring at the thrumming pulsations of the ceiling fan and mentally peeling away the layers of my miserable past to wonder what brought me here. Beside me, the rusty old television faded in and out between static and advertisements. I turned my head, weak, to face it. And what I saw there was as if the very gates of heaven had opened, the trumpets had sounded, and suddenly I was home. It was a sign, a signal, a moment of pure Elysian clarity that bathed me in a glorious yellow light: Hutzler 571 Banana Slicer. Only $3.69.

I didn’t need to think. I now knew my purpose. I ran to the local library and went straight to amazon, ordering a Hutzler immediately. Even in pictures, it was clear to me that this was my saving grace, and I knew with such acuity then that the Hutzler would turn my life around. I was J. D. Salinger, and yes, that day was a perfect day.

The weeks that followed were weeks of nothing but banana slicing. My Hutzler is sleek, fits perfectly in my hand, and seems to perfectly contour itself to any banana which I place in its capable blades, like the renowned Sisterhood’s traveling pants. I now live my life surrounded be a veritable plethora of untarnished, pristinely sliced circles of banana-rific glory. I got my life back together, went to school, helped my father out of his rut. And now I know, as a riparian traveler on this glorious potassium river, that with my Hutzler in hand, anything is possible.”

While I was writing, and giggling about, this post W was reading over my shoulder and asked if I had ever heard of the hot dog slicer. I’ll admit I was skeptical about checking this product out…because I have seen hot dog slicers before; they’re called knives. I checked it out and found it’s actually pretty cute. 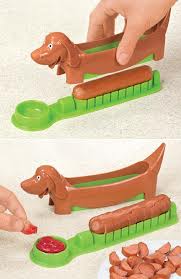 This isn’t something I’m going to buy for my own use but maybe for my friend’s young children. Although the more I look at it the more I want it. If only I ate hot dogs. 🙂

Well I think that’s it for bizarre. For today at least 🙂

I love comments. Leave one below! Cancel reply