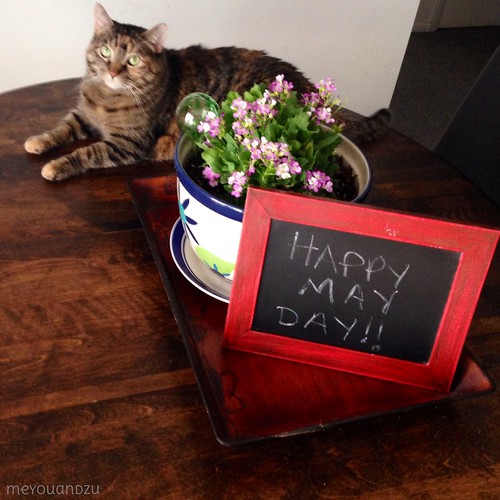 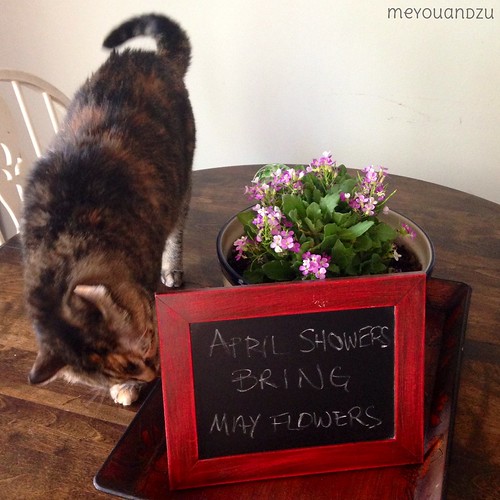 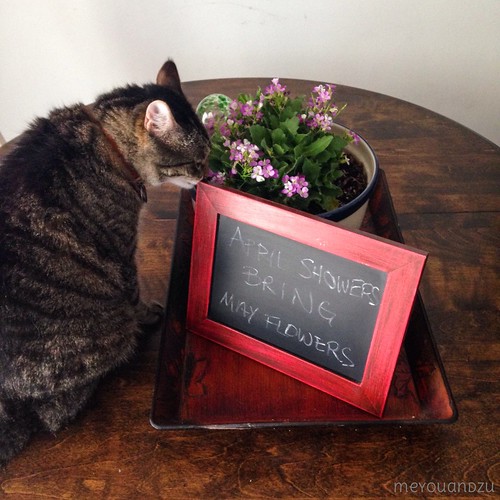 Z is for Zeus and Sylvester

Most people thought that I would post about ZuZu since she makes writing a Z post super easy. But I wrote about her last year and I wanted to keep with my theme of telling about my childhood pets. Zeus and Sylvester are sisters who we “adopted” from the neighbors. I grew up in rural Iowa so neighbor means the neighboring farm a 1/4 mile away. And by adopted I mean the neighbors’ farm cat had a litter and they asked if we wanted a kitten. So my sister and I trekked over and we each picked out a kitten. After they were old enough to be weaned we got to bring them home with us. They were the first kittens to come into the family since our tailless cat Mittens had joined the family while we still lived in Wisconsin. (Mittens lost her tail to infection when she was a kitten so all she had was a stump). In the basement of my parent’s house I put their paw prints in paint on the brick wall. I painted their names and decorated around it. It’s still there along with prints of several other cats; it commemorates their existence. 🙂

Sylvester was my first cat. Quick divert…my first cat was actually a calico kitten I named Gabby. My mom took me to a friend’s house and I got to pick out a kitten. I think I was 8 or 9 and was so excited to get my own cat! Unfortunately she and I parted shortly after because she was hit by a car. I remember crying a lot and my mom said I could stay home from school that day. So technically Gabby was No. 1 but Vester was the first cat who was mine who lived through cars, coyotes and all the typical dangers of being a farm cat. I was really into Tweety & Sylvester when they were born so naturally I would name a black and white cat Sylvester regardless of its gender. It fits her though. She suffers from a skin allergy and constantly chews on herself until she’s raw. My mom feeds her a special raw diet to prevent the allergy from flaring up. In the summer she loves to sun herself and it seems to help keep her skin soothed. 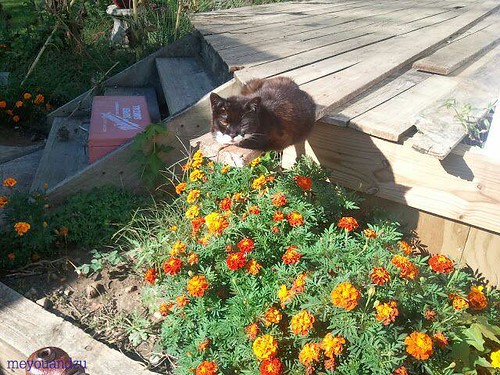 Zeus was my sister’s cat. Her nickname was Booster (no idea why…again with these weird names and nicknames) and our first family email address (when dial-up internet was still top technology) was booster@suchandsuch. And you know how when pets eat too much chocolate they can die? Well this cat is the exception to the rule. When my sister was a high school senior she had to sell boxes of chocolate candy bars for a trip. The small boxes of candy were stored in larger cardboard boxes in the top of her closet. One day we discovered Zeus had slipped into the closet and had ripped open the cardboard boxes to get through to the chocolate bars and had eaten her way through several boxes. My mom ended up having to buy half the candy because the cat had chewed almost every bar. It’s funny now but my mom and sister weren’t too pleased with her at the time. She can smell chocolate a mile away. If there’s any even remotely near her she will find it and chew through the wrapper to get to it. Not once has she had a health problem because of her chocolate intake. 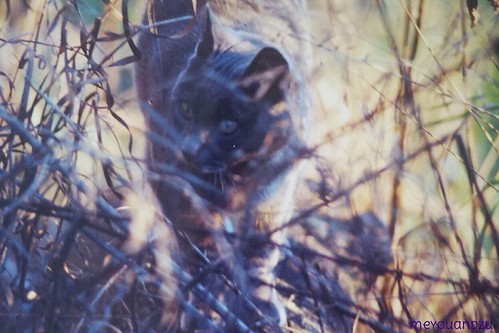 She’s also missing part of her left ear. She and Armstrong got into a tussle many years ago and Armstrong bit off part of her ear. So I now call her Left Ear. If you look at her ear in the picture below you’ll see there is no pointy tip like a cat’s ear should have. 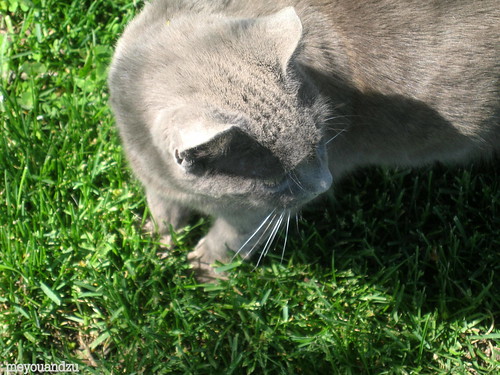 They are also really tiny cats at least compared to their offspring and even the Kitty Fantasticas. These two started the clan that still exists today. Zeus was mother to Lavinia who had Gemini, Armstrong & Kola. Q was their father. Sylvester mothered Xerxes. This summer they will turn 18 and are still living the dream at my parent’s paradise.

This is the last A-Z post of 2014! Can you believe the month is already over? I have no idea what happened to April. I’m excited for May and June though. Two friends are having babies and I’m going on two really awesome trips. So over the next month I’ll be sharing more about that with you guys!  In the next few days I’ll be writing a A-Z Review post and would love to hear feedback about the month from everyone. Be watching for that too!

Y is for Younglings

Youngling is the first thing that came to mind when I thought of the letter Y. I had just looked at all these cute pictures of Roma as a kitten and the word just popped into my head. But I’m going to throw a little nerd knowledge at you guys.

“Youngling” is a common term for Jedi initiate, a child in the first stages of Jedi training. It is also a generic, species-neutral word for a young child.
– Star Wars Glossary

If you’ve ever spent any amount of time with my husband (or read some of my posts) you know he’s a HUGE Star Wars fan. His fascination with it rubs off on me and I start unconsciously referring to Star Wars. Unfortunately for this post and all of you reading it it’ll now be affecting you.

Anyway, back to my youngling Roma. She’s the only one I have baby pictures of and boy was she a cutie. She’s also the only one we’ve had that was truly a baby when we got her. 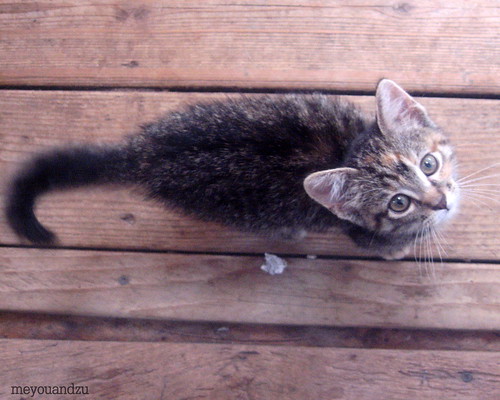 Chubbs was a year old and had already grown into her chunkiness. ZuZu was 10 months when we got her so she too was already grown up. I see puppies every now and then that I think she would have looked like them. I can only imagine her as a pup. She did have some puppy fat that she’s shed since but otherwise she looks the same. The pictures below were taken on our drive home from the shelter and the next day at the dog park. 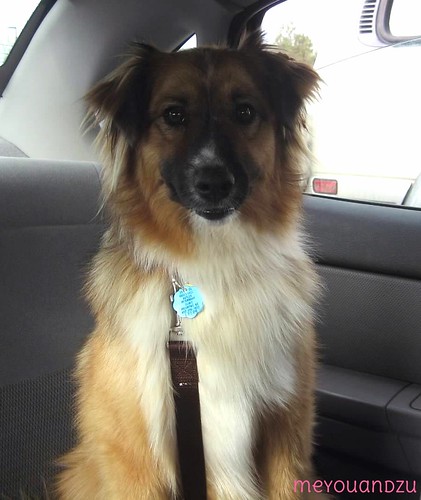 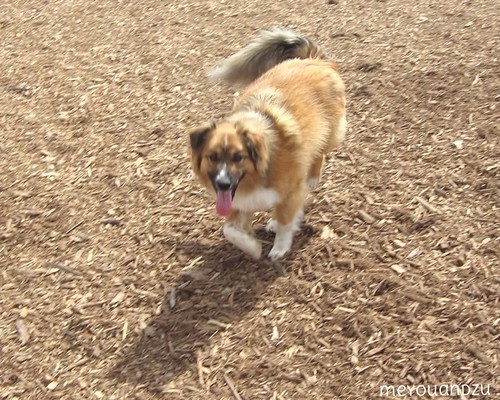 Roma was a feisty little kitten. She was only 6 weeks old when we adopted her and even though she was teeny tiny she was scrappy. Chasing Chubbs around was her favorite pastime. One day she stole an entire piece of pizza off the table. The piece was bigger than she was and she could only drag it across the floor, growling the whole time. 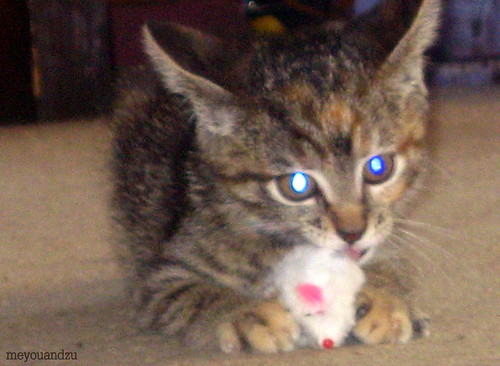 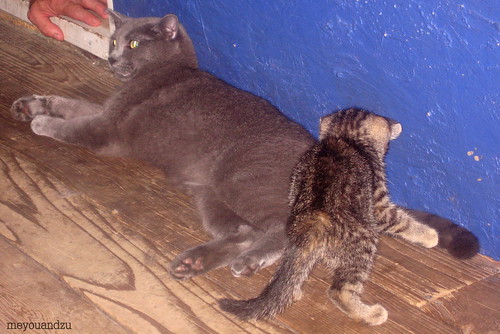 I’m pretty impressed I was able to put cats and Star Wars together in harmony. Tomorrow is the last day of the month which means letter Z has finally arrived! See you guys tomorrow. 🙂

…struck with knowledge that there are few words in the English language beginning with x, y, and z..

Okay, so I wasn’t suddenly struck with this knowledge but I’ve been perusing the X,Y, Z section looking for fun words and came across this one. There are some interesting words that start with X. Some definitions I’d prefer to forget….

I was trying to find a word that could lead to an interesting post but I fear I’ve failed on that. Instead you can look at some pictures about my half blind childhood cat Xerxes. Xerxes was born a normal kitten with 2 eyes. Not long after he got an infection and his eye became one giant scab that fell off piece by piece. It was really gross at first but after a while it was just fascinating to stare at. 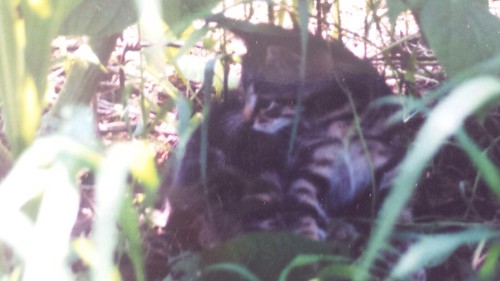 As usual the pictures I have of him aren’t the best…I can’t tell if he has both eyes or just one. He adjusted to having only one eye. It didn’t stop him from hunting or tussling with the other cats. 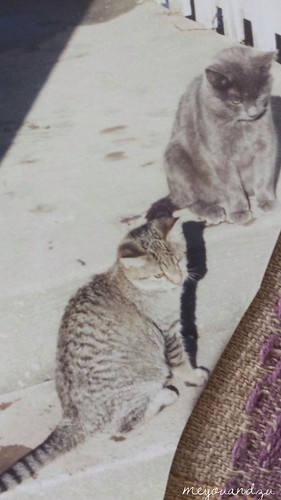 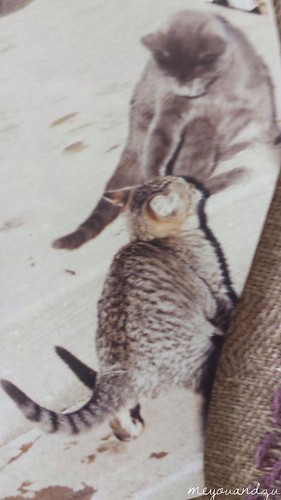 He was a scrappy cat, probably because he was down one eye. Just another of my clan of misfit cats. 🙂

Guys! It took me 22 hours to remember I hadn’t done the post for today. U was on of the few letters for which I didn’t have a plan. This last week has been crazy, crazy, crazy. It turns out not having the perfect U topic was revealed to me this morning. A few days ago Wayne told me the city was planning on shutting our power off today so they could do work nearby. When I woke up this morning it was still on but I could hear the crews outside making lots of noise. ZuZu was snuggled next to me instead of playing outside like she usually does when people are around. When I finally dragged myself out of bed…to the couch…ZuZu was pacing. Every room I went to she would follow me, pacing, whining. I felt bad but I wanted to get a shower in before the lights went out…which didn’t end up happening. I ended up lighting some candles in order to see and by the time I got done all 3 critters had pushed open the door and were hanging out with me.

From room to room they followed me. I considered leaving but there were 5 big city trucks & our landscaping crew outside and for a while my car was blocked in. I had planned on spending the morning reading and baking cupcakes. Cupcakes were out but reading sounded like a great idea. Zu and I snuggled on the bed but the generator started up again and one of the trucks was backing up making the beeping sound. Zu immediately jumped up and started pacing. When she headed for her under bed cave I decided we would all go back to the bathroom. It’s the closest I could get to a protective cave. It’s small. It’s dark. It’s quiet. It was the perfect place. So for 2 hours we just chilled in the bathroom.

ZuZu still paced when she heard a loud noise but most of the time she curled up next to me. Chubbs scampered in a little bit later, Roma followed a few minutes after that. I could tell the cats were upset at their nap time being disturbed but I don’t think they were actually scared by the noise. Being followers they naturally had to be in the same room as us. 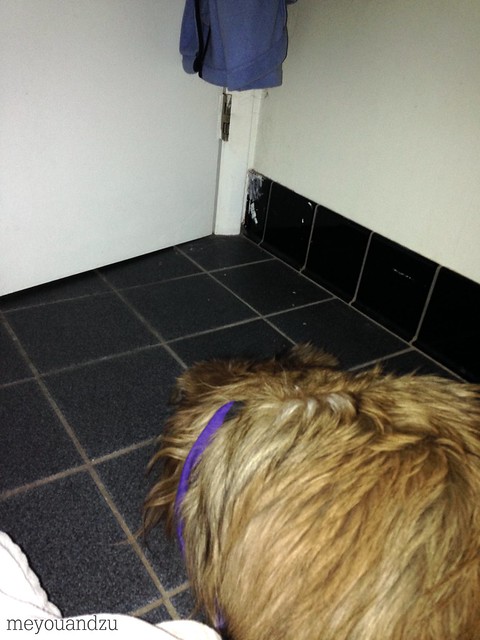 When my car was finally free I decided to take Zu out of the house to run some errands. I also needed to charge my phone. Since the bathroom was too dark to read my book and the iPad wasn’t charged I spent the bathroom time surfing Pinterest on my phone. My phone, having started halfway charged, didn’t last long. I spent the next two hours driving around the side streets and playing at the park. By the time we made it back home the power was finally back on!

There’s very few instances that any of the pets are truly upset. There were a few times after we adopted ZuZu that she scared easy and I didn’t know how to help her. I bought some of the calming pills but she just spit them out. I think I still have the full bottle in the back of a closet somewhere. Now I stay with her whenever she’s scared, hoping that she’ll sense I’m not afraid and she will calm. Removing her from the situation would be the next best solution. Today both of them worked to help make her a happier dog! 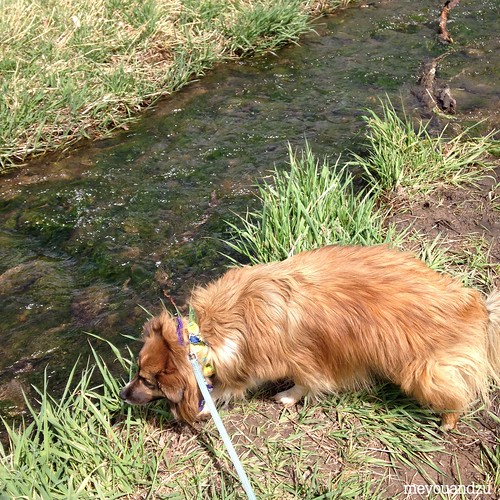 Much happier at the park!

How do you handle when your pets are upset?