Hosted by Dachshund Nola & You Did What With Your Weiner.

Join in Black & White Sunday below!

If your dog is anything like ZuZu then you probably spend a lot of time traipsing through the snow with your dog. Which means your probably familiar with what I like to call dog-cicles, those disgusting chunks of snow turned ice that the dog pulls out of their paws.

If you’ve already made it inside having the dog chew on them isn’t such a big deal but when they do it outside it only makes matters worse! There have been a few times she accumulated so much she looked like she was wearing boots made of snow. Once Wayne actually carried her home because she wouldn’t stop chewing on her feet and started limping due to the buildup.

He’s such a sweetheart. That’s why I love him.

This year a lot of people have asked me what the best way to protect your dogs’ tootsies and I always suggest mushing wax because booties are a big no way in our house. Zu won’t even let me get near her with them.  I currently don’t have any wax in stock and am too lazy to make the 10 minute drive to the pet supply store to stock up. So today when Zu and I went out in the freezing cold we had to brave with unprotected paws. She tried to stop a few times to gnaw but I was able to stop her. But when we got inside she wanted no help from me! So I just followed her around picking up chunks of dirty ice. Ugh.

Back to the wax. It’s non-toxic and completely safe for dogs so when they start licking…and they might at first…there’s nothing to worry about. I don’t know if mainstream pet stores carry it; ie Petsmart, Petco, but our pet supply store does and I think another smaller, local store. Or you can order online for a decent price.

I’m curious on your thoughts on mushing wax. Have any of you ever tried it? And if so, do you like it?

Hosted by My Life in Blog Years & Dachshund Nola.

I’ve been so busy getting all the little things together for the wedding I’m in this week that I haven’t had a lot of free time to write anything other than Every Day In May and even less time to properly visit all my fellow blog friends. So I apologize for that and for the fact that it won’t get any better until this weekend. Though it’s a week late here’s our Estes adventure. Beware there are lots of pictures and by lots of pictures I mean lots of elk. I’m sorry.

I had a training class in Estes Park on Monday and Tuesday of last week. Instead of driving back and forth up the hill W came with me and we spent the weekend there. First we dropped lil’ ZuZu at Camp Bow Wow, her home away from home. Anytime we are gone for more than 10 hours or are out of town we send her packing.

Our first night we spent at The Crags Lodge because the Stanley was booked for the conference and other events. It was a lot of fun and I’m about to speak blasphemy but I liked it better than our stay at the Stanley. The downstairs lobby was a seating area with books, a fireplace, TV and best of all giant checkers! We went out for dinner but then came back to play a few rounds.

The training class was held at the Stanley in The Lodge. The Lodge looks just like the main building (below) but smaller. It’s also pet friendly and the main house is not.

The only reason there is a picture of my feet in the pictures below is because it was the first time I’ve worn sandals and I think they look awesome because they cover up all those ghastly scars. Also it was raining while we were hanging out on the porch and there wasn’t much else to take pictures of…besides elk. This time of year the elk typically hang out in the town, holding up traffic and laying in people’s yards. There was a large group hanging out at the hotel while we were there and for some reason we all felt it was necessary to photograph them. I probably have hundreds of pictures of elk because every time I see one I take a picture of it and we usually visit Estes at least once every couple of months; every couple of weeks in the summer. Nonetheless I took a few more during my trip. 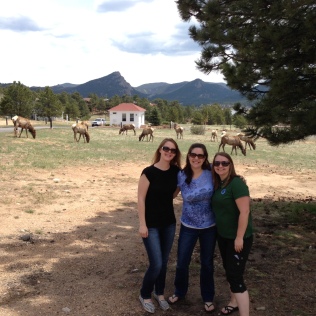 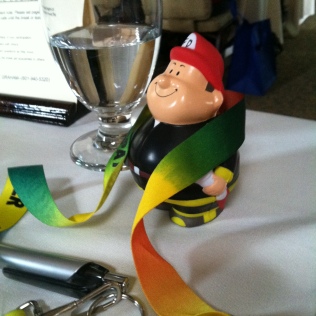 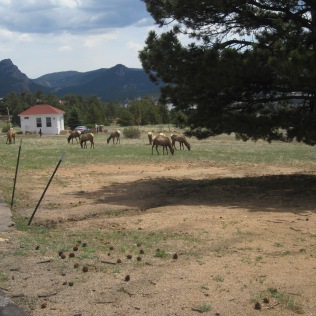 After Monday’s class we went to the bar to have a drink which is a must if you’re ever at the Stanley. It’s something we do every time we are there. And then we trekked off to our 4th floor room for the best part of the stay….the 24/7 channel featuring “The Shining.” It’s the movie, not the mini-series, and it’s awesome! Falling asleep to it and then waking up a few hours later to a different part only to fall asleep again can bring on some really weird dreams. Just keep that in mind if you ever stay.

We also explored a little. This was not our first time staying though so really we were looking for the ice machine but any time you can wander through an old hotel like this is pretty cool.

Now some people might say the first picture is blurry because the ghosts of the hotel are hanging out in my photo. We were staying on the 4th floor which houses quite a few of them. Unfortunately it was just my poor camera skills. No ghosts…this time 😉

On Tuesday after class we took a drive into the park. We have a yearly pass so we try to go whenever we can. The view from up there never gets old. I could visit a million times and always think it’s amazing. Something about being on top of a mountain makes me happy. 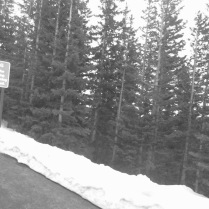 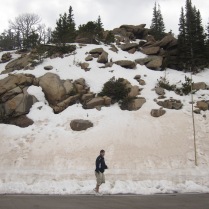 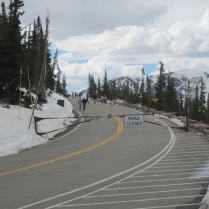 There’s still a lot of snow on the mountains. It’s just now beginning to melt but it’s still chilly up there. It’s always about 10 degrees cooler in Estes than in the foothills so if you ever visit make sure to pack a pair of pants and a sweater because 9 times out of 10 you’ll need it. And that’s just in the city. When you finally get into the mountains it’s downright cold and probably snowing/raining. The road, known as Trail Ridge Road, was closed at Rainbow Curve which is one of the last few stops before you get to the Alpine Visitor Center, the 2nd highest place you can drive to on Trail Ridge. The road is usually only open from late June to early September so we rarely get to the visitor center. We’ll be going back for a few days in June and hopefully it will be open by then.

Alright, that’s enough elk pictures for one day. I took so many more though but I’m sparing you the pictures. I might get one more extra post in tomorrow; if not you’ll see them again this weekend! Have a great rest of the week 🙂