I realize I have been horribly absent this summer and I’m so, so sorry! We bought a house so between signing a million documents for that, work and everything else in between I barely have had a free moment to blog. And now we’ve adopted a new member of the family! 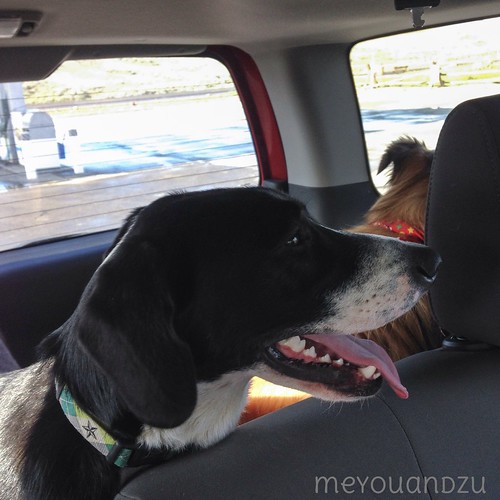 Bandit joined the family on Tuesday which happened to be National Dog Day! He’s 10 months Lab/Border Collie mix with a bundle of energy! He’s been adjusting well so far. He’s spending lots of time outside with toys he has dragged out there, running back and forth, squeaking as he goes.

He wants nothing more than someone to love him. He’s such a huge snuggle bug. When I’m on the floor or the couch he’ll come running over and jump up to just lay his head on my lap. There are some issues with his manners so I’ve got my hands full keeping him from jumping and not to bark at the cats when he sees them.

ZuZu is adjusting as well but still not quite sure why there is another dog in her house. They play well together until Zu decides she is done playing and will bark at him to leave her be. She’s hid in the basement a couple times, snoozing on the couch, while Bandit entertains himself upstairs.

The Kitty Fantasticas are not adjusting quite as easily. Bandit likes to chase and bark at them so he’s been whapped in the face a few times by an angry cat. They have lots of room to run around now, including the yard, so they usually make their escape leaving Bandit wondering where they went. 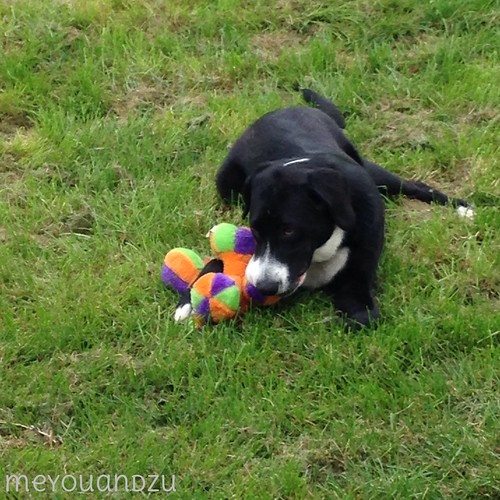 As for Wayne he’s had to get used to a dog sleeping on the bed. Bandit curled between us the first night and by the middle of the night Wayne had moved out the the couch because Bandit kept pushing him closer to the edge. The last few nights he has slept in various places trying to find his favorite spot. These have included between Wayne and I, at the foot of the bed, under the bed with ZuZu, or on one of the many dog beds.

He’s so much fun and I just love him! I’ve also finally got free time again and some fun changes coming for fall so I’ll be back in the blogging world soon!

This year the Fire Hydrant 5K was a weekend earlier than normal. It’s usually the first or second weekend in June but it was held on Memorial Day weekend this year which worked out well for the timing of my Nica trip. I would have been bummed if I would have missed our annual event!

This year we walked instead of running because we had a couple friends joining us. As usual ZuZu hopped in every pool along the route, not wanting to move when other dogs tried to join her. 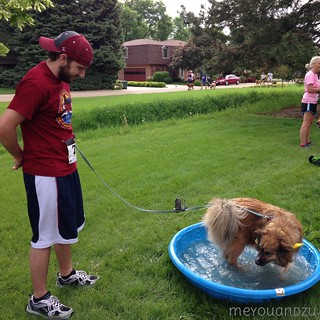 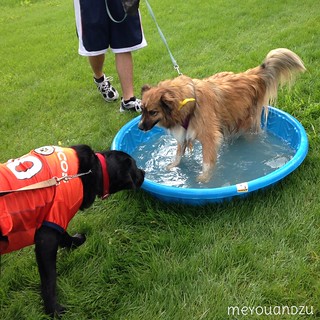 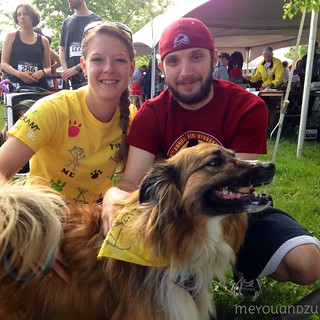 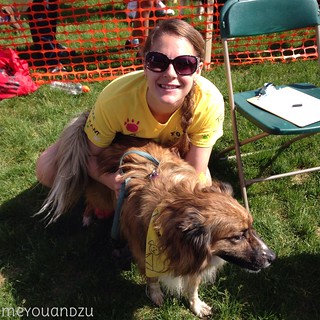 I entered Zu in the contests to see how talented she was. The first was a sit contest where you were given 30 seconds to see how many times you could get your dog to sit in that time. I wasn’t prepared so we only got 11 sits. But since she usually won’t sit when other activities are happening around her I considered it a success.

Bobbing for frankfurters was hilarious. The girl put three cut up pieces of hot dog in the tub of water. ZuZu, not understanding, just stared at the water wondering why her treat had sunk to the bottom. The girl then picked up one of the pieces for her to smell and dropped it before she could eat it. Zu dunked her nose but came up snorting water. It probably took 3 or 4 minutes of coaxing and encouragement before she finally plunged her face in and grabbed one of the piece. All of the sudden she was like “hey, there’s hot dogs in there!” But by that time we were in last place. 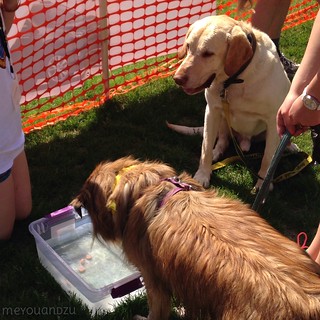 The last contest was a catching contest where you see the farthest you can be from your dog and still have them catch the treat. ZuZu just stared at the treat as it went flying through the air and followed it’s trail all the way to the ground. Then she snagged it and ate it.

They had a peanut butter eating contest but I think it was later in the morning and we had already determined ZuZu wasn’t cut out for competing; although I think that contest she could have come out on top. Next year… In the meantime we’re going to start practicing our talent so we can beat all the other dogs at the next Fire Hydant 5K! 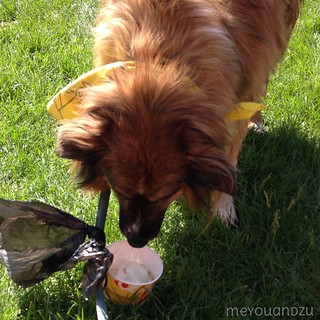 I completely forgot to title this post when I published it!

ZuZu had her yearly checkup at the vet last week. 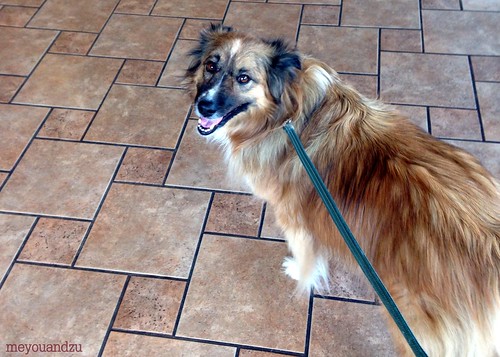 She’s always happy, no fear for her when it comes to the doctor, but it doesn’t stop her from trying to get outside whenever anyone is near the door. 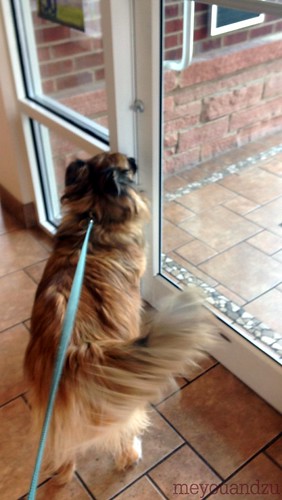 There’s a bit of pacing to be done during the wait between the tech and vet but usually she’ll either sit on the bench next to me or lay on the floor. Occasionally she’ll hear something outside the door and stare at it curiously, wondering what could be happening without her on the other side. 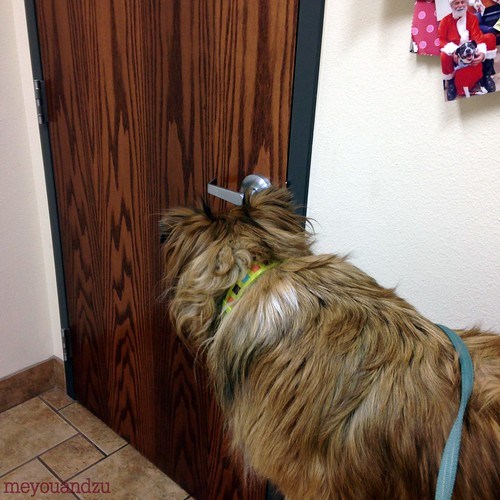 The appointment always goes well and this year was no different.There’s always lots of love to go around for the vet and the techs. Of course their bowl of treats is helpful in winning her over. Other than a couple minor (and very understandable) anxiety attacks the appointment went smoothly. The first was when the tech came at her back end to take her temperature; the second when she refused to take her Bordetella through the nose and had to get a shot instead.

Our only bad news was when Zu was told she needed to lose a couple pounds. She’s currently weighing in at 42.9. It’s recommended she be around 40-41. My year long recovery from foot surgery has taken its toll and I’m guilty of giving her too many treats because she’s so darn cute. With the weather getting warmer (not counting the annoying snow storm we had over the weekend) I’ll be getting her out more often and get those few pounds shed!

R is for Running Dog

I’ve captured some great shots of ZuZu running around. As hard as I looked I couldn’t find any of the cats. They will occasionally run around the house as if being chased but if I make a move to get the camera they stop and act completely normal. One of these days I’ll get one! For now I’ll have to settle for showing you my three favorite Zu running moments. 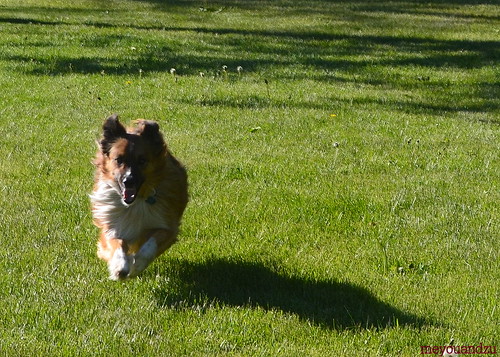 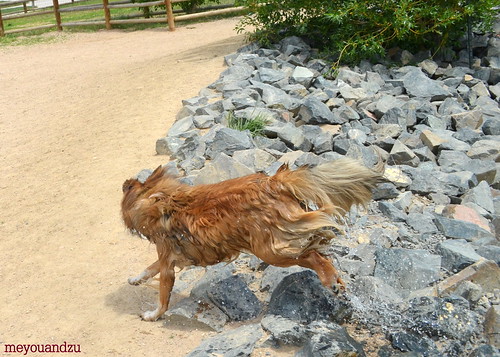 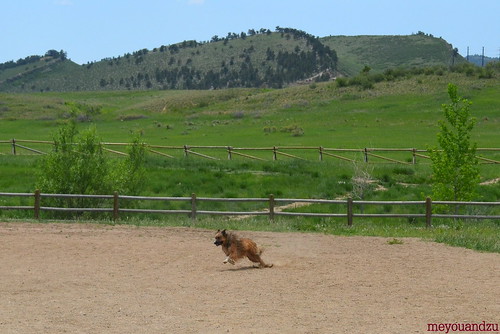 Sometimes ZuZu chews up things around the house but I feel I can’t truly punish her because I left them laying around. So I just say “Oh ZuZu.” I once accidentally left a bag of groceries on the floor while I ran outside to grab more groceries and when I came back she had eaten half a ham and ripped open a bag of buns. But I was the idiot who left food on the floor…. 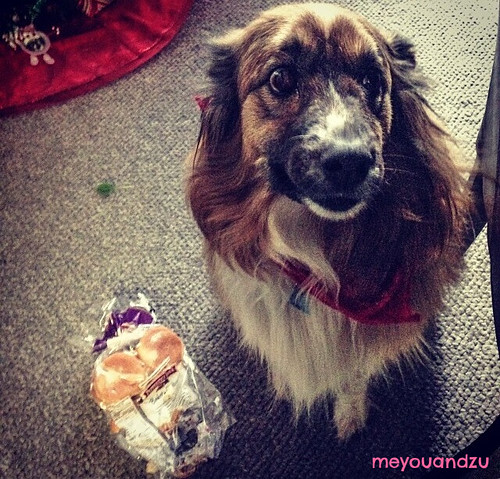 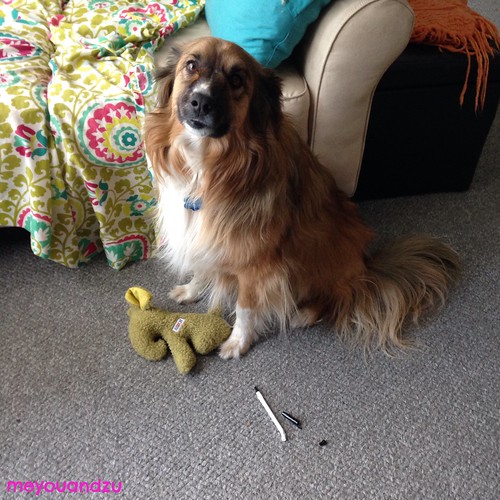 A chew toy nearby and still she chooses the pen…

When she knows she’s done something wrong she looks at you with a guilty look and wags her tail. 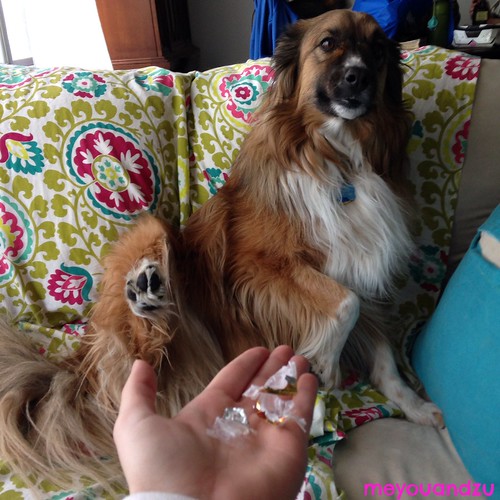 Then she jumps up on the couch and lifts her back leg as if to say “Remember how much you love me? I know you do because you give me belly rubs. Do that now.”

I usually send her out to her house to spend a few minutes contemplating what she did. She’ll stand inside staring at me sadly until I give in and tell her she can come out.

There were times last year I would come home from work in the morning and she would be sitting on the couch with the guilty look yet I could find no evidence of what she was up to. She only does it when she’s alone in the house because she knows she can get away with it. Last week I left for work and knew I was forgetting something. A few hours later I got a text from Wayne saying ZuZu had ripped apart the trash that I had forgotten to take out.

This next picture started out as an “Oh Chubbs” moment and then turned into an “Oh ZuZu.” 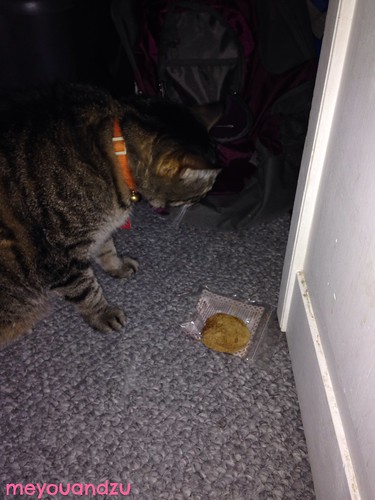 For the past few days Chubbs has been rolling around in front of the closet door, meowing and purring. It’s where their food is kept so I just figured she was hungry and Roma was hoarding the food again. But I knew that Chubbs had eaten so I figured she just wanted in to get to the catnip. So I opened the door and she scampers in, happy as a clam. I left to put laundry in the dryer and when I came back I saw she was eating something out of a plastic bag. On closer inspection I realized she had opened one of the hiking bags and pulled out the freeze-dried dinner I keep on hand for Zu. The little brat had been gnawing on it the last few days! 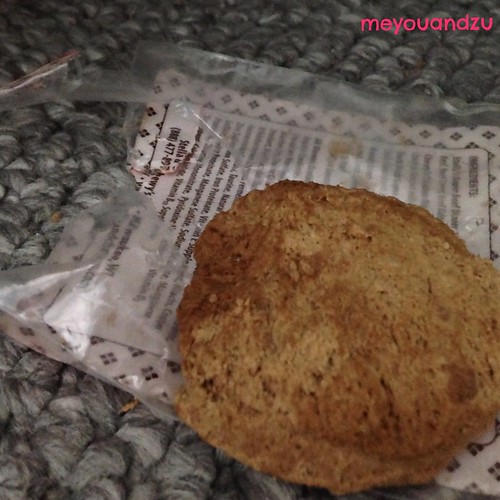 Of course by this time the commotion had attracted ZuZu who, despite her fear of Chubbs, decided to snag it and eat it like a treat. The cat, not certain what had happened, sniffed around the empty bag for her treat. I kicked them both out and left it at that. The goofy cat is still hanging around the door hoping I’ve replaced her treat with a new one.  I usually don’t even keep the food in the bags since they’re stored within reach of the creatures but after the hiking post last week I had tossed everything back in the bag without paying any attention. Again…my fault. Oh pets. 🙂

How do you handle your pets when they’ve done wrong but it’s very much your fault?